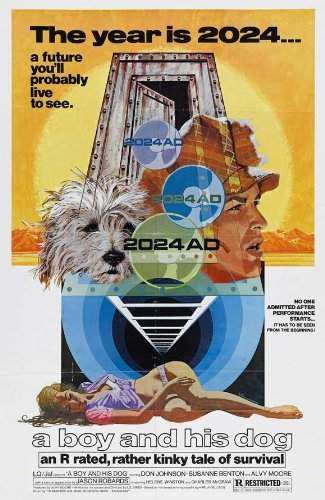 What You Are in the Wasteland

The fantastical allure of the post apocalyptic world is the same as that of the orphaned hero found in so many children’s stories. The world of the wasteland is free of the burdens and responsibilities of everyday life- no jobs, no bills, no rules but those you make. It’s a fantasy where the harsh glare of atomic fallout starkly divides into light and shadow, and where survivors are either hard-fought heroes or despicable villains. A Boy and his Dog is not that fantasy.

The film lays it’s cards on the table pretty quickly. We are introduced to our Boy, Vic, and his telepathic Dog, Blood, as Vic eager to pick up the leftover scraps from the gang rape of some poor wasteland survivor. Waiting until the raiders have left, lest they become that night’s dinner, Blood admonishes Vic for risking their lives for a cut of the action. Alas, the victim is already dead and Vic laments what a shame it is that they cut her up - she could’ve been used a couple more times! “Ah, war is hell” comes the grim punchline from Blood. Cue the twangy upbeat country music.

In this grim and morbidly comic movie, Vic and Blood’s strange relationship is, unsurprisingly, the main focus. Blood’s human-sensing telepathy has left him unable to forage and hunt for his own food and Vic is on an unending quest to find a woman and get laid. Driven by these twin urges, the pair are led eventually to Quilla, a woman from the subterranean world of the ‘Down Under’ who blows Vic’s mind with her lust for consensual sex and talk of this strange thing called ‘love’. Naturally, she’s a honeytrap.

Leaving an injured Blood up top, Vic follows her to the bizarre world of the vault-dwellers. A nightmarish parody of 1960’s Americana replete with star spangled flags, marching bands and homecoming queens. The people of the Down Under use garish makeup to hide their sickly faces and a veneer of polite, traditional respectability to hide a brutally enforced regime where you can be executed for ‘lack of respect, wrong attitude and failure to obey authority’. Their stunted recreation of conservative America turns out to be a little stale in other ways too- they lured Vic down not to civilize him, but to use his (presumably irradiated) sperm to repopulate their dwindling society. Quilla, too, turns out to be more than she seems- less the helpless, naive victim and more of an icy, scheming bitch, who hastily drags Vic into an escape plan when her bloody coup also fails to bear any fruit.

The film takes its time to show us other micro-societies that have formed in the wake of the apocalypse. In the tiny capitalist world of the bartertown- boasting both brothel and movie theatre- we see its patrons give up hard-scavenged food to watch crude black and white movies that show a glamorised version of the sex and violence that dominate their lives. An encounter with a wasteland ‘king’, drawn through the desert on a chariot replete with minstrel, harem and slaves is a further mocking indictment of humanity’s bluntly unimaginative predilection for repeating its mistakes.

Visually the movie is full of all the imagery that is now visual shorthand for ‘post-nuclear apocalypse’: dusty buildings and clothing both cobbled together out of the scraps of the wasteland; the demented, pressure-cooker world of the vaults and the dusty, sun-bleached over-world that has you blinking phantom grit out of your eyes. The film is an acknowledged influence on such iconic series as George Miller’s Mad Max movies, and the Fallout videogames and though A Boy and His Dog is a little smaller in scope than either of those, it’s influence has been far-reaching.

The film is based on a short story by legendarily cantankerous genre writer Harlan Ellison, who partially wrote the script until he suffered an attack of writer’s block. Notoriously, he hated the last line of the film but there are other significant deviations within it which alter the one of the story being told.

Ellison’s Quilla is the naive pawn of the Down Under’s tyrannical society that movie-Quilla pretends to be. She’s a prisoner, waiting to be married off to some waiting suitor, who escapes with Vic because their brief liaison has inspired her to rattle the bars of her cage. Both she and Vic take their morality from the broken societies that raised them- his an unsophisticated world of animalistic brutality and hers a hypocritical facade of respectability and repression.

Movie-Quilla, on the other hand, is a classic preppy bitch, manipulating the helpless boys around her with only the thought of replacing the Down Under’s ruling party with her own. Vic’s fate in the movie version of the Down Under is both horrifying and hilarious- no stud-duty for him, instead he’s strapped to a milking machine with each deposit carefully labelled and gifted to the line of young brides queuing up to ‘marry’ him. Movie-Quilla only rescues Vic from this torture so she can use his brutal nature to help her rise to the top of the pile but her plan is de-railed and the two make a hasty escape back to the wasteland above. 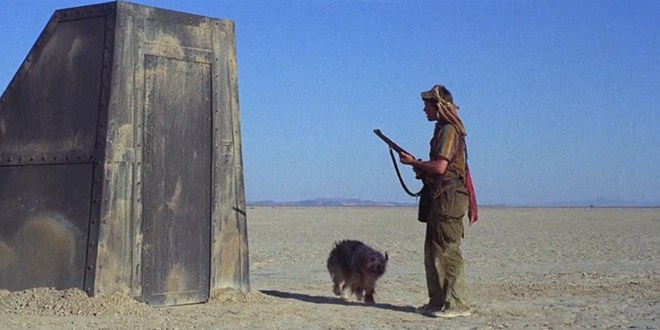 It’s from here that the movie reaches its famously bleak conclusion. Vic is reunited with a starving, wounded Blood. Quilla whines on in the background like a spoiled brat about how ‘if he loved her’ Vic should abandon the mangy cur, whilst Vic himself makes apologetic pleas for forgiveness to his dying friend. The movie fades to black and we open on a new morning, with Vic and a much perkier Blood heading off into the sunset. Chipper after his hearty meal, Blood muses on the choices of the departed third wheel- "Well, I'd say she certainly had marvelous judgement, Albert, if not particularly good taste.

Ellison rejected the ending of the film, describing the last line as ‘moronic, hateful and chauvinist’ and he wasn’t alone in his condemnation. Feminist and fellow new-wave science fiction writer Joanna Russ wrote that she could not support the move because she would not be ‘complicit in her own murder’ and lamented the loss of the subtle ambiguity present in the original short story. There’s definitely an irony in the way the movie happily plays with jokes about rape, murder and cannibalism but balks at using any of the profanity of the original- Hollywood respectability would fit right in with the Down Under’s society.

Ellisons’ work often features unlikeable, downright nasty characters but for all his distrust of the idea that humanity’s default setting is good and wholesome, he does have faith in the ability of individuals to make the right choices on their own. Ellison’s Vic comes back changed by his journey into the underworld. Reflecting on his choice at the end Vic is reminded that Quilla said he didn’t understand love but, sure he did, ‘a boy loves his dog’.

For all it’s adolescent humour and for all it lacks the subtlety of the original story, A Boy and His Dog is a trashy (and trash-filled) classic that leaves you with plenty to think over. We need stories without easy answers, that aren’t just hero fantasies where we can forget that the brutality of the wasteland is the same driving force as in the society that created it. Vic doesn’t come away from his adventure an unadulterated hero but he is changed enough to recognise his own capacity for love and his ability to sacrifice for it. Maybe that’s enough to hold out hope for humanity a little longer. Character, after all, is what you are in the wasteland. 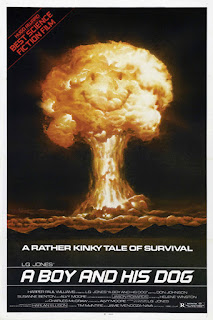