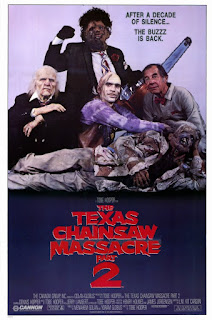 The Saw Is Family.

Set thirteen years after the first film’s eponymous slaughter in the Texas farmhouse. The Sawyer family have escaped their crimes. Still roaming freely, continuing to kill across the state. On their tail however, is former Texas Ranger “Lefty” Enright (Dennis Hopper) who is investigating the disappearance of his niece and nephew, Sally and Franklin (characters from the first movie). He crosses paths with Texas DJ "Stretch" Brock (Caroline Williams), who is broadcasting one night when two obnoxious college students call in and appear to be murdered on air by someone wielding a chainsaw. The buzz---as it would seem--is back!

The Texas Chain Saw Massacre--the very definition of horror. A spellbinding nightmare. After such an iconic masterpiece, it would seem obvious that no one - not even Hooper - could repeat the same trick with the same ingredients and create something as horrifying for the sequel. Tobe understood that. Why even make just a copy of its predecessor? Instead of only atmospheric terror, The Texas Chainsaw Massacre 2 emphasizes the black comedy side of the original with the buzz of chainsaws and icky gore. The bits of dark humor certainly were there in the first film, but many minds barely registered any of that, as they were too busy digesting the intense brutality on screen. 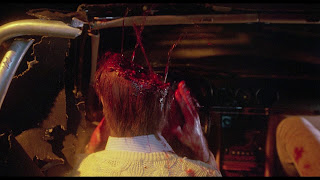 With the ridiculous level of gore and the cartoonishly comedic tone, it’s easy to understand why many people rejected The Texas Chainsaw Massacre Part 2 at the time of its release (many still do). It is unlike any other horror sequel. Sure, many horror sequels have departed from their predecessors, however there is possibly no bigger shift between two horror movies in the same franchise than between Texas chainsaw 1 and 2. Hooper's original is a sweaty, claustrophobic masterpiece that’s terrifying, specifically because of its documentary-like immediacy. It doesn't feel so much like a movie as it does, some horrible thing that someone accidentally caught on camera, a quality that gives it a sense of danger. The sequel, on the other hand, also directed by Hooper and written by L.M. Kit Carson (screenwriter of Paris, Texas), goes off in a very different direction. It's much more black comedy than horror.

As a product of the ’80s, the movie really cranks up the gore. the tone of the movie makes the violence much more uncomfortable because it's taking place within the context of a scene that's simultaneously comic and horrifying, garishly photographed and shrill. This film is a deranged and twisted return to Texas, full of uncomfortable emotions. Simultaneously disgusting and brutally hilarious, you can’t help but fall in love with the unique weirdness of this mad "devil's playground" that switches all the time from laughter to deeply disturbing feelings in a heartbeat. This is the magic of Texas Chainsaw 2: it never lets you settle into a groove, never lets you get comfortable, yet makes us laugh at things that are truly horrifying, disturbing and nightmarish.

There aren’t many actors that could deliver the campy lunacy and urge to catch the crazy cannibals as Dennis Hopper does in his role as the former Texas Marshall "Lefty", who tries to solve the case with the authority of a bad-ass action star. Dennis Hopper used to claim this was the worst movie he ever made. This is a bummer for a lot of reasons, not the least of which because it suggests he forgot ever starring in Super Mario Bros. Mainly though, it’s because he's terrific in the movie. Completely dialed into its lunatic frequency and creating a "hero" that's every bit as weird and maniacal as the villains and causing just as much evil as good. 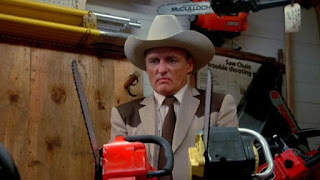 Caroline Williams “Stretch” is the movie's real MVP though, as she is firstly, grounded and strong -- the kind of woman who puts herself on the line to play the tapes of the Sawyers' latest murder on the air -- but by the end has completely given in to terror. Stretch is just as strong as any final girl -- she's a fighter and a survivor -- but her reaction to everything that happens is understandably, abject terror. However, she never loses the presence of the strong-willed woman we get to see in the beginning and before the end. We see her utilize and flip the misogyny of females that was represented in horror at the time (the camera will frequently search for "suggestive" angles, when our attention turns to her). She escapes death by mastering her sexuality, remaining courageous, even when in complete danger and treated as an object of Leatherface’s Freudian projections. She judges the sexually disordered Leatherface, neutralizing him with her expectations of orgasmic pleasure. Crushing the sexually frustrated male that tries to reclaim his masculinity with over-compensating power tools. 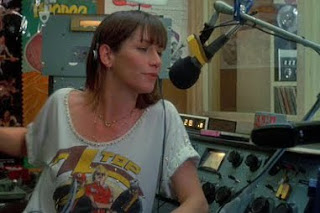 Many people claim that this movie tries to ruin one of the all-time scariest movie characters Leatherface, by turning him into a horny teenager with discipline problems. Sure, Bill Johnson's performance under the mask is sillier and spazzier than Gunnar Hansen's, but so is the movie in which he's appearing in. It's different, sure, but I personally enjoy the way he’s represented in this movie. Again, it’s just down to personal preference, here he’s portrayed almost like an unpredictable, over sized teenager, throwing tantrums in the shape of chainsaws. He's the youngest brother who is clumsy, truculent and who, in his way, just happens to discover his first teen-crush. Given more of a "gentle giant" feel, even if such a thing is possible when that involves him putting a skin mask on his love interest's face to protect her. 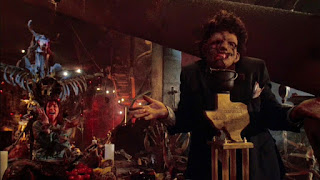 I truly wish there were more sequels like this, ones that are willing to take huge risks instead of trying to remake the original, this is an ambitious cult classic that dares to bend the rules rather than cater to the whims of expectations. Just like the original, this film is absolutely gleeful in its repulsiveness, even if it's a lot less terrifying in this context. It is a special dish that excites, entertains, disturbs and amuses, sometimes all of those at the same time. Hooper tackles them in a wonderful manner without completely abandoning the original Chainsaw's petrifying magic. It’s an exceptional campy action horror comedy. Instead of giving the fans what they wanted to see, Hooper made the film he wanted to make. By purposefully subverting expectations, Hooper ended up capturing the spirit of the 80s in exactly the way the first film did for the 70s. He Turned down the gritty, grimy realism, and cranked up the camp to 11. Made the Sawyer family into businessmen, who literally chew people up and spit them out to achieve their ends. Dropped the scream queen who survives purely by luck of the draw, and opted for a final girl who fights back, both with chainsaws and sexuality.

Horror sequels don't get any trashier or greater than this. 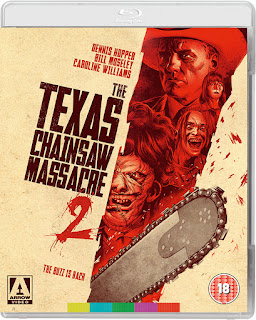