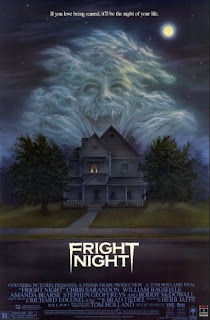 Welcome, To Fright Night!
1985, A few years before The Lost Boys and Near Dark were released and vampires became cool. Tom Holland released a movie that perfectly encapsulates 80s horror. Fright Night is a thrilling and humorous tale concerning horror-loving teenager Charley Brewster (William Ragsdale) discovering that his new neighbor, suave and sophisticated Jerry Dandrige (Chris Sarandon) is a vampire, and his attempts to thwart the ghoulish newcomer with a little help from his friends and his longtime vampire hunter hero. 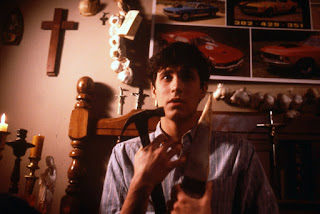 From the opening shot of a full moon, a single howl lets you know you’re in for a treat. The hints of folklore and mythology come quick, letting the audience know what’s to come. With Fright Night, Holland perfectly blends elements of horror, mystery, comedy and an overwhelming sense of nostalgia and reference toward classic horror, but what makes "Fright Night" work is that it has FUN with the genre without ever becoming condescending to it. And what fun it is. The film moves at a great, economic pace, and is filled with some amazing practical effects, A particular highlight is how deliciously gory the film is -- and there are some real standout spooks here, none of which rely on jump scares but on anticipation. It’s thrilling with a slow-paced eerie atmosphere, building tension in a way that is certain even though it takes it’s time. It’s more than evident that Holland spent a good deal of time watching Hammer films. The times have changed for these midnight movies though, allowing them to become darker, sexier and bloodier. 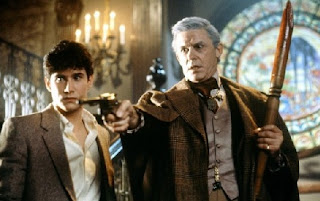 It's easy to dismiss Fright Night as a simple vampire movie. On its surface it's a story about a young man and an old man battling a vampire, with the youth trying to save the one he loves and the elder trying to find meaning in his wasted life. However, these simple concepts are the blood slicked portals through which a deeper meaning can be found. This is a film about relationships, coming of age and sexual awakening. There's the skin-deep level in which Charlie and Amy flirt with losing their virginity. There's the romanticized, sexy dangerous fantasy of Amy and Dandridge, Evil Eds self-reflection and the pseudo father son relationship between Charlie and Peter Vincent. Most importantly, however is how each of the character's relates to the central dilemma and how their various actions produce a menagerie of results. While Charlie's friend Evil chooses to embrace the darkness in order to feel whole and embrace his outcome, Peter Vincent chooses to fight it for the exact same reason. Dandridge gives his would be killers a plethora of opportunities to escape and only truly commits to non-essential violence when pressured. Both Vincent and Dandridge spend the bulk of the narrative trying to avoid conflicts in favor of living out their existences in relative peace, despite the vampire having to kill and Vincent being a faded star desperate for the limelight. Everyone in Holland's world is a loner and it's how each one uses their individuality that makes Fright Night quite a unique horror experience.

The charm and charisma of the Fright Night cast is one of the main reasons for its success. Swapping cape for a turtleneck, Chris Sarandon's magnetic allure as the undead creature of the night Jerry Dandridge is presented here as a lost soul, tormented by his past who straddles the divide between menace and charm in every interaction. He embodies every trait a vampire should. He's sensual, alluring, menacing, petty, witty and he turns into a mean monster when he's pissed. Roddy McDowall is gloriously over the top as " vampire expert Peter Vincent, fully enjoying himself as a hammy amalgamation of the men he took his name, Vincent Price and Peter Cushing. McDowall just brings an air of class, maturity, and wit to the proceedings. William Ragsdale does an excellent job portraying the lead hormonal teen Charlie, whose erotic predispositions are abruptly shattered by a real-life nightmare, taking the pituitary output to a lizard brain level of self-preservation. Charlie's transition from hapless victim to fierce vampire hunter is aided by some amazing makeup work from Ken Diaz, which allows the viewer to visually chart Charlie's progression throughout the movie. Amanda Bearse is great too as Charley's love interest Amy, who becomes enticed under Jerry's hypnotic charms. She starts off as the typical doe-eyed teenager but gradually becomes more mature and voluptuous during her vampiric transformation towards the end. And of course, there’s Stephen Geoffreys as Charley’s best friend Evil Ed. His performance will either entertain or enrage you--it differs from person to person. Either way, his woeful battle with life and who he is, is an essay in itself.

Tom Holland executes his vision with finesse, delivering an atmospheric cinematic artistry that generates so much charm and warmth with its semi-light-meets-semi-earnest tone. With its nicely stuffed story, solid scares, and neatly drawn characters, the film will always stand out as a completely satisfying tribute to the movies of yesteryear. Many people bemoan today that they don’t make horror movies like they did back in the 80s. When this is a movie that wholeheartedly in 1985 thought--"they don’t make movies like they used to". This is one of those films that sums up exactly what I love about the 80s. There is a charm and an honesty that would make it painfully cheesy and stupid in any other era, but in the 80s, it's solid gold. It was a time of reflection and admiration for the ancient scrolls, a time of change but also a time of resurgence, Fright Night" is a fast-paced film, the movie sprints out of the gate and rarely lets up creating a frenetic, dizzying pace as we watch a bumbling teen, try and fend off against a crafty nemesis who's ahead of him at every turn. 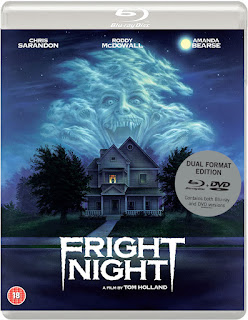 Posted by Trash Cinema at 3:00 AM No comments: