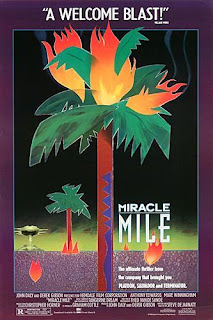 Listen, i'm just a guy that picked up the phone.


Miracle Mile Follows the tale of Harry Washello. A hopeless romantic who meets the woman of his dreams Julie and they fall completely in love within the few hours they spend together, strolling through the LA landscape in a hazy daze of 80’s summery love. They arrange to meet up again at midnight outside Julie’s work when her shift finishes. Harry however, manages to oversleep from his nap due to a power cut in his hotel, he finally wakes up after 3am and frantically dashes to the cafe hoping he hasn’t ruined his chances with his perfect woman. As you might expect, disheartened Julie has long gone when he arrives. He tries calling her in the phone booth outside, but to no avail. Moments later the phone starts to ring and Harry instinctively goes back and takes the call. It’s not Julie on the other end though, but a shaken young soldier named Chip who’s allegedly calling from a missile silo in North Dakota. Chip has misdialled and believes he’s talking to his father, frantically imparting some devastating news, nuclear missiles are on their way in approximately 70 minutes. There’s a sound of gunfire on the line and then Chip is silenced. Shocked and unsure if the caller was genuine or a sick prank caller. What ensues is a Kafkaesque journey through the barren early morning streets of Los Angeles, where anything and everything goes, as Harry sets out to find Julie and escape L.A. whilst also trying to make sense of all the escalating madness, all in the span of some of the most bizarre, heart-stopping hour-and-twenty-minutes ever put to film. 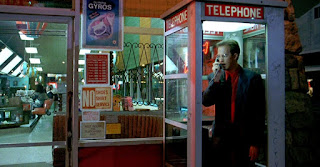 And what a delightful anxiety-riddled batch of madness it is, all brought to life through Steve Jarnatt’s excellent direction, Theo van de Sande’s eye-catching cinematography and the implementation of a constricted time window. Miracle mile has some of the most confident and consistent styles I've seen put to film. It's a fever dream of music, tension and bright and popping colours that efficiently and flawlessly create a world of ever-present menace, paranoia and anxiety; constantly yet subtlety cranking up the absurdity as the possibility of the worlds-end draws near. De Jarnatt completely understands how to use every frame of his film and how to extract everything from LA and the strip of Miracle Mile, aiding it to carve out the movies distinct personality. Tangerine Dream's completely mesmerising and sparkling score pulsates almost constantly, replicating our heartbeats whilst also venturing into some powerful synthesized soundscapes that help accentuate just how wonderfully strange this night is. 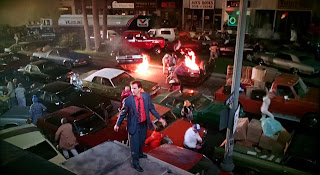 One of the strongest parts of the movie is the colourful and lively characters that are on display throughout. The aforementioned couple of harry and Julie are adorably endearing, yet it's the amazing cast of eccentrics (played by almost every amazing character-actor from the 80’s) that they encounter amidst the chaos of the films runtime that really bring forward the movies frantic and fun spirit. Although the movie never rests in order to spend time on character development or narrative development, they are still there in abundance - this is a film that is purposeful and surgical in every single frame it uses. It's committed to a confrontation with fate, and when heroics become increasingly silly and unsustainable, we see the characters, especially Harry, contend with the monumentality of the inevitable. It is a story about romance in the face of the apocalypse, a tale about missed chances and the significance of one's individual happiness in the face of mankind's greatest catastrophe. Rich in emotional resonance Neck-deep in the feel of hopeless, late-night scrambling’s and boiling over with tension. 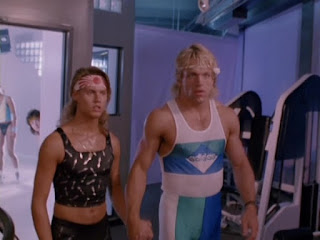 Although its tone and general mood veer towards the area of nihilism, there’s an ever-running sense of optimism and hope lying underneath the hysteria. Present solely in the characters of Harry and Julie, full of heart and infatuation for one another, who serve as the perfect counterweight to the madness presented on screen. They embody that one magical feeling that makes humans so unique and the one thing to remember mankind by--Love. Love may just be the decisive factor for humanity, an aspect which has the ability to change people altogether, especially considering a scenario like the inevitable doom of the human race, a time of survival and thinking solely for oneself. Love is still possible, it happens during the best of times, yet also the worst of times, including humanity’s final hour.

Miracle Mile is, in its purest form, a devastating film, one that brings to the forefront of its audience the insanity the universe can thrust upon us at any given moment, but it’s also one which tells its viewers that, whatever outcome fate may bring us to, there’s nothing to fear so long as we are surrounded by the people we love, as well as the drive to live our lives to the fullest extent. It’s a tragedy, but it’s one where humanity will be remembered not for its selfishness in the midst of madness and chaos but instead their innate ability to live, love, and care for one another. It's beautiful, fun, sweet and also emotionally devastating. Furthermore, it is without a doubt, unforgettable. 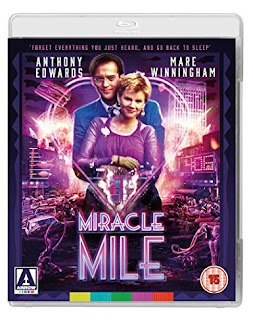