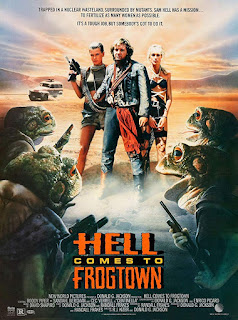 “In the latter days of the 20th century, there arose a difference of opinion… “

The trailer for Hell Comes to Frogtown goes out of its way to remind you that this is a bad movie. Do you like classy, artful movies about life’s deep philosophical conundrums? Turn around pal, this movie ain’t for you. It touts the crazy plot and cheesy acting as the worst you’ll ever see in a way that sounds an awful lot like someone trying really hard to convince you they don’t care what you think because they’re totally doing all of this ironically. Or maybe they just knew that the promise of an hour and a half of pure trash would be an irresistible lure to a certain kind of movie-lover. Well, consider me lured.

The movie takes place in a future ravaged by a nuclear war, where the surviving wildlife has been mutated into walking, talking parodies of humanity. (Just the amphibians though- nothing weird.) The titular Sam Hell is a drifter and serial impregnator, tracked down by the matriarchal Medtech- seemingly the governing body of this post-apocalyptic future- who want to us his rare super-fertility for the good of mankind. First though, they trap his valuable equipment in a chastity belt rigged to explode if he tries to escape and send him on a mission to prove himself- head into Frogtown and rescue five fertile women kidnapped by the evil Commander Toty.

The plot is, of course, just an excuse for a series of weird and bizarrely hilarious events to torment Roddy Piper’s beefcake hero with. He gets electro-shocked in the groin more times than is reasonable from people who consider his junk to be valuable treasure. He has to fend off the attentions of their amorous amphibian spy who is aiding them in the rescue and later, having being caught by Toty’s second-in-command Bull, he is saved at the last minute from a chainsaw based castration when the terrifying device runs out of fuel. It’s like a ‘Carry-On’ movie but with a lot more violence. And frogs. 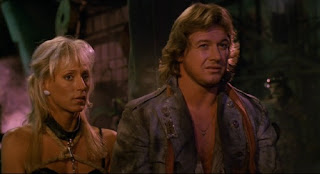 Not all of the comedy set-pieces centre on Sam. Sandahl Bergman does a great job in her role as the straight-laced Nurse Spangle- dedicated to debasing herself for the cause, whether by her ridiculous regulation-compliant fake-seduction of Sam or by posing as his scantily-clad captive in a ploy to get into Frogtown. She’s all long limbs and elbows, adding a self-conscious awkwardness to everything she does, including a hilarious scene where Spangle has to come up with a sexy dance to help Commander Toty’s ‘three snakes’ get in the mood. It’s a performance that lifts her character from more than just eye candy and she’s a big part of what made this movie work for me.

That the film looks pretty great is another definite point in its favour. You can definitely tell the budget wasn’t astronomical, with only really a small number of locations and smoke-drenched sets used, but the creature effects are actually quite impressive, with inside-frog Arabella as a grotesque stand out. There’s a variety to the mutant effects that gives the other Frogtown inhabitants a sense of individuality that makes the world seem a little more realised.

The movie takes a great delight in parodying the kind of adolescent fantasies that these kind of movies often present- where a tough loner travels the wasteland, fighting the bad guys and winning the sexy gratitude of damsels in distress. Sam is, of course, neutralised by the all-female organisation that captures him but they’re all pretty desperate to jump his bones. Gruff soldier Centinella, who comes along on the rescue mission, jumps into bed with Sam on their first night making camp and Nurse Spangle’s recommendation for treating a traumatised escapee bride is for Sam to give his best shot at impregnating the poor woman. And it works! Her thousand yard stare is cured after a session with Sam’s superjunk and she’s suddenly well enough to skip back to Med-tech headquarters. 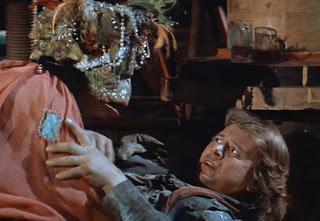 The film has a kind of weird attitude to women and sex that’s hard to pin down. Yes, Toty is kidnapping ladies to satisfy his ‘three snakes’ but he’s enough of a gentlefrog to get them in the mood with a ritual involving lots of candles and silky scarves. The final badguy (spoilers!) turns out to be the cop from the start, now known as Count Sodom, who is angry at Sam for knocking up his little girl but even more furious at the this new world order where women call the shots in regards to procreation. Even Sam himself turns out to be something of a classic romantic hero, hiding his tragic past behind rippling pecs and some truly cheesy one-liners. Squint and you can see him on the cover of a very weird Mills & Boon.
Donald G Jackson went on to make a whole string of movies set in the same Frogtown universe, although with none of the original cast and not much of whatever magic it is that makes Hell Comes to Frogtown work. Maybe this isn’t a great movie but hitting that cinematic sweet-spot where bad becomes trashy genius isn’t as easy as you might think. Sometimes that leftfield inspiration that drives a man to make a whole string of movies where a guy fights frogs in a post-apocalyptic desert, crystallizes into a cult masterpiece- a slimy green addition to the trash canon. Welcome to Frogtown.

Hell Comes To Frogtown Is Available Now On Blu Ray. 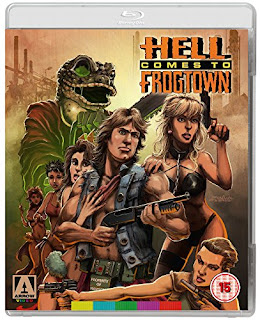 Posted by Trash Cinema at 1:32 PM No comments: