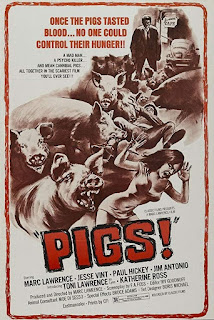 Maybe it was all those ads in Veganuary or maybe it was pure guilt over my repeated failures since to give up the bacon butty, king of the breakfasts, but for whatever reason, when I saw 88 Films’ reissue of Marc Lawrence’s Pigs (aka Daddy’s Deadly Darling, aka The 13th Pig aka Horror Farm aka…), I just had to grab a copy.

Pigs promises a lot with it’s garish cover- scenes of porcine carnage, people being torn limb-from-limb in a frenzy of piggly-wiggly mayhem. What it delivers instead is something totally different, an idiosyncratic little gem that mixes its murder-lust with a little bit of mysticism, and creates a twisted fairy-tale replete with mad old witches, dangerous woods and a wolf in sheep’s clothing…

The film opens with the formerly Great Zambini (played by writer and director, Marc Lawrence) sitting in a barn with some poor corpse, monologuing about how he’s had to keep feeding his pigs man-flesh since they, um, ‘accidentally’ got a taste for it after eating a hobo who’d fallen asleep in a nearby field. The scene is a great introduction to the ambiguity that runs through the film- Did Zambini kill this guy to feed to his pigs? Is it the guilt making him explain himself, or madness?

The next scene introduces Lynn Webster, a gal who’s the very definition of ‘troubled but cute’. We meet her dressed in a nurse’s uniform, driving like all hell’s a coming to the tune of an annoyingly catchy little hippy number. She stashes the outfit before heading into town where she stumbles into a nice little waitressing job in a cafe run by local weirdo and pig owner, the Great Zambini.

What follows is a nice little series of setups and subverted expectations. Everything we learn about Zambini suggest he’s feeding those pigs something fresher than meat from the local mortuary slab. Lynn gets a garish warning that ‘he ain’t’ been right’ since a trapeze accident that left him clinically dead for several minutes,  a warning followed up by Lynn’s lurid nightmare of Zambini cutting her face over-and-over again.

Zambini’s weird shut-in neighbours keep making complaints to the local sheriff that the pigs are roaming around at night terrorising people. When it gets back to Zambini they appear to receive a terrifying visit from the Great man himself- in shabby circus regalia, threatening them to keep their mouths shut. A bizarre warning from the local homicidal pig farmer or just the delusion of two hysterical old women?

While the film does it’s level best to convince us of Zambini’s sinister nature, we’re painted a different picture with young Lynn. The tear-filled phone-calls home to her worried father lead you to believe that she’s some kind of hippy caricature – a free-spirit who ran away from her ‘totally square’ parents. She makes quite the impression on the men of the town and is soon out on a date with a local Lothario, but he is frantically rebuffed when tries to take advantage of her all alone in his pickup truck. Her true nature is revealed when she later lures him back to her room and slices him to ribbons. Zambini is, of course, happy to help her dispose of this tasty meal for his pigs and does so again when she offs the psychiatrist sent to track her down by the facility she escaped from. Blinded by her sweet exterior to Lynn’s true nature, or overcome by his obsession with his pigs, their joining of forces is the beginning of their downfall and ultimate fate as tasty pig-feed.

The movie plays around with a lot of horror cliches. Zambini’s an obvious choice for a tragic monster but maybe he’s just a poor, brain-damaged ex-circus perform who loves his pigs too much not to feed them their favourite food. If the townfolk had ever managed to get their mob together I’m sure we would’ve seen pitchforks and torches galore.

Lynn could easily have been just another pyscho-killer, but her genuine distress and confusion about what’s really happening, along with the bluntly explained tragic backstory, don’t really make her the type of horror movie killer that you get a kick out of watching. 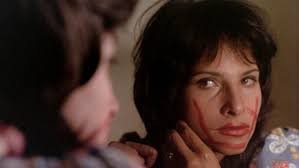 The movie’s original title is ‘The 13th Pig’, which is one of those titles that only makes sense once you’ve got to the end. The local mortician’s only real part in the movie is to tell us that the ancient Egyptians worshipped pigs. Zambini’s weird neighbours insist over and over to the sheriff that he’s killing people to turn them into pigs. The final scene of the movie see’s Zambnini’s pigs rounded up to be taken to another farm and, lo and behold, there’s an extra pig! It’s not a great payoff since the whole mystical sideplot is, like most of the other plot-threads, a little half-baked, but it adds a satisfying extra layer of to the whole groovy weirdo vibe of the movie.

The 88 Film reissue and the Troma distribution hint that this is, by design or by compromise, an exploitation movie (see also the lurid cover for fooling poor saps like me) but it doesn’t really deliver on the gratuitous tits and gore that genre might suggest. For the life of me, despite my disappointment at the lack of glorious carnage, something about this one tickled my heart-strings. I kept imagining an early 00’s indie remake: Zooey Deschanel as the quirky mystery-girl with a secret; Alan Alda as the weird old grump with a heart of gold; the boring suburban town too mainstream to accept them and their passion for murdering people. Wouldn’t ‘Garden State’ have been improved with a little more murder?

Despite the truly ear-piercing soundtrack of screeching swine, despite the fact that it doesn’t quite deliver on that awesome poster, something about this movie just clicked for me. Sometimes that’s all it take and ‘Pigs’ has earned a spot on my ever decreasing shelf space. Written, directed and starring one man, it’s a peek inside his head and maybe the implications of that are horrifying enough all on their own. 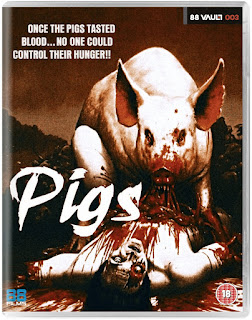